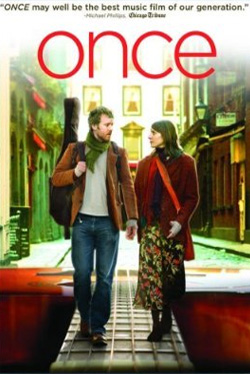 Just when I was beginning to become abnormally bored with many of the films that have recently crossed my path, along came a little peace of artistic magic to strengthen my belief in the art-form of film.

The story revolves around a street performer(Glen Hansard) singing and playing guitar on a Dublin street who attracts the attention of a young Czech migrant (Marketa Irglova), herself a pianist, singer and lyricist. They begin spending time with one another under the unifying factor or song writing and begin to be drawn toward one another in the wake of broken relationships. Their collaboration leads to the recording of a demo album with a “tossed together” band of musicians, as their relationship grows in unexpected ways.

One of the greatest things about this film is the way it was shot. It is obvious that “Once” was not shot on a high-dollar budget. They make use of “gorilla-style” filming techniques and according to the “making of” features, didn’t bother getting permits for a great deal of their shoots. They really show what happens when the term “indie” film making is taken seriously and not used as a trendy catch-phrase. That being the case, the filmmakers needed to rely on the music, actors and storyline… none of which are lacking.

“Once” reminds us that small can be beautiful and that the simplest of storylines can get a grip on us, at our core, and takes us to new levels of connection. “Once” is a movie you definitely don’t want to miss.